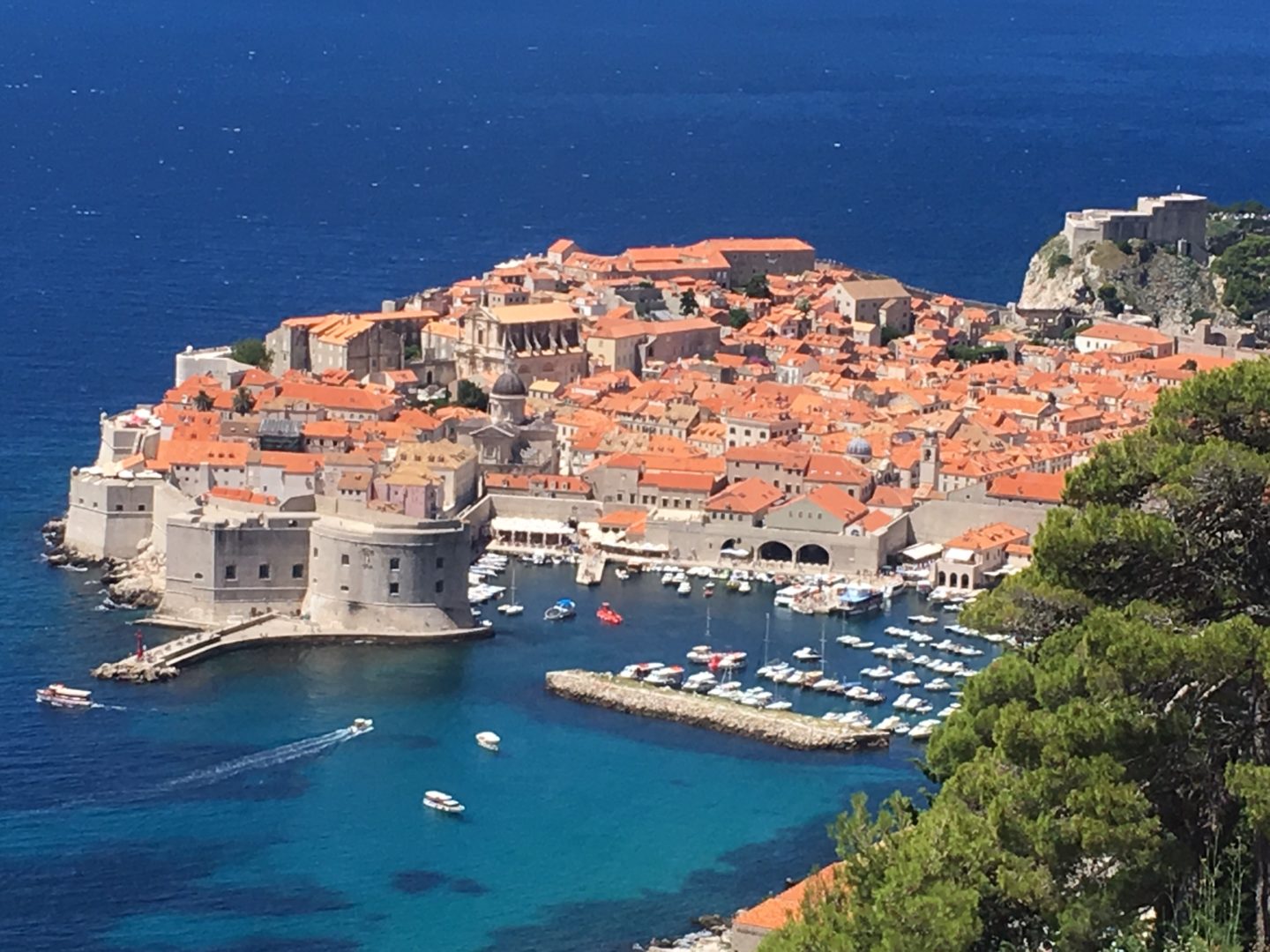 Places to GO, people to SEE, a constant GO GO GO, but I leave that all behind (in Silicon Valley) when I go to beautiful Dubrovnik, Croatia.

So I’m starting out by telling you all about my first trip to Croatia back in 2004. There I was driving from the airport on the highway looking down from the cliffs onto the crystal blue waters; trying to soak it all in and not really knowing what to expect.  Then as we were coming around a corner, you suddenly see OLD TOWN – Dubrovnik – blossoming from the water.  AMAZING!  Words cannot express how beautiful it was for me to see.  They don’t call it the Pearl of the Adriatic for nothing.

Back then I had not been outside of the USA (except for a short stint in Mexico) and I just kept thinking to myself how lucky I was to be in this remarkable country; a country that I had not really known much about other than what I learned in social studies back in high school – and that was all about the war in the 90’s when Croatia was still part of the former Yugoslavia.

So meeting my soon to be husband (who is first generation Croatian American with both parents from Dubrovnik, Croatia) and asking him the question, “Where is Croatia?’ did not go over very well! But I would soon learn more about its history and the loving people and traditions of this beautiful country. Nowadays, people hear me talk and think I’m Croatian – LOL. (I’m not –  I’m a mix of Scottish/English & Slovakian). But being married to a Croatian makes me feel like I have been adopted by these beautiful people.

OK, so back to my first time in Croatia (2004) with my soon to be husband. We decided to go in September and I have to say it was a great choice.

Going to Croatia as many times as I now have, there are some things that I have never done since my first trip and may not do again just because of our kiddos.  I like to think that I’ve already experienced something so amazing that I want to keep those memories just as they are – and not have my children flip out because they want to be at the beach or eating pizza instead of exploring an 11th century church.

I remember walking the walls of Old Town for the first time. The views were spectacular.  Words simply cannot describe.  Still some of the best photos that I have are from that first year up on the walls.  Old Town is surreal.  It felt like you were on a movie set and the walls are being propped up, but then you quickly realize they are made of solid stone and up to 20 feet thick and 80 feet high in some places.  Majestic!  I mean it’s pretty hard to take a bad picture. 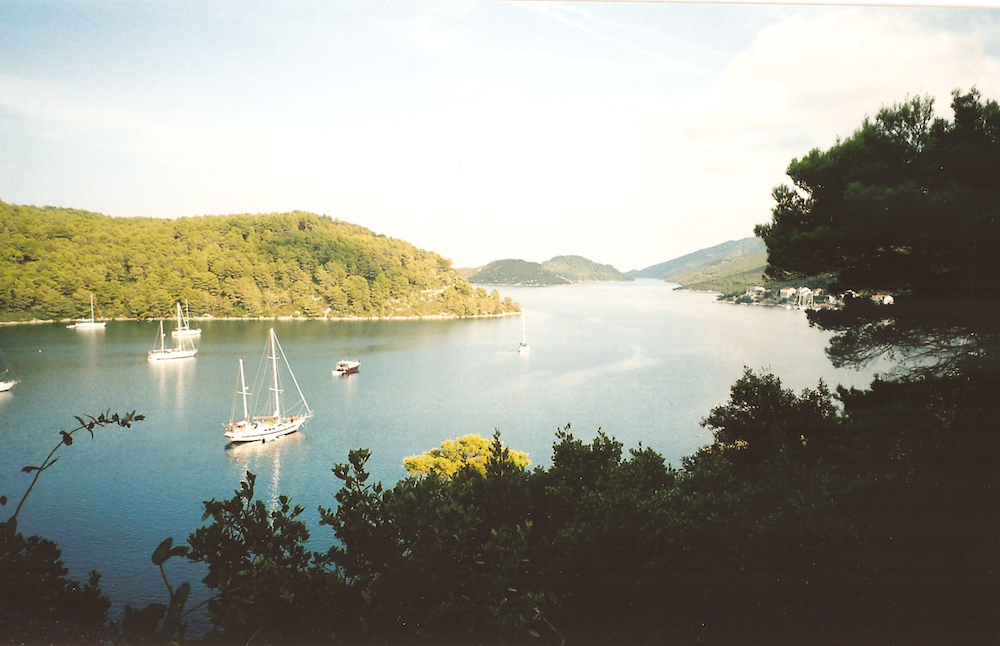 *We made sure to visit the island of Mljet. (We took the high speed boat to get there faster. So it’s close to 2 ½ hours.) Now this place is a must see; serene and picturesque is a nice way to describe it.  Most of the island is a forest and national park. One of the main reasons we went was because my soon to be husband’s uncle was the priest on the island at the time and we wanted to make sure to visit.  He gave us an all access tour of the island, told us of amazing stories and even showed us remains of some Roman ruins.  The best part of the island we visited was the big lake that included an island within the island. Wow!  On the island was the Monastery of St. Mary dating back to the 11th century.  He took us into the church and told us more of its history. (I mean we were truly spoiled by this sweet uncle, and being so immersed in the culture around us.) It’s what makes Croatia so endearing. 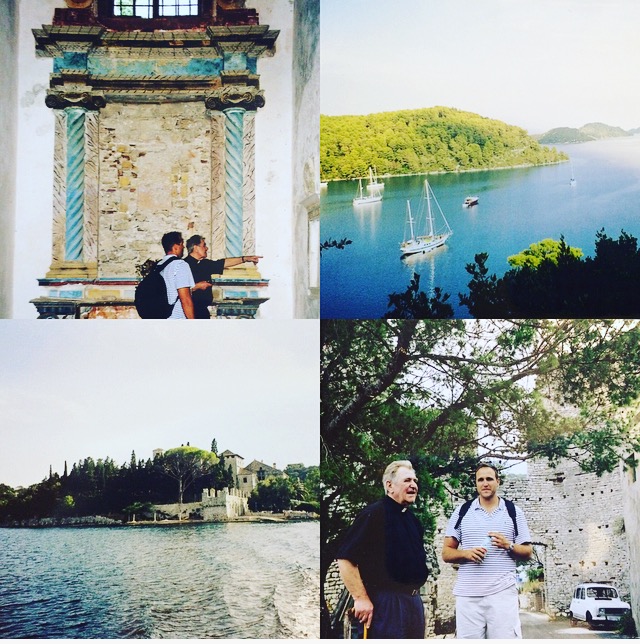 *Medjugorie-Now this is one place that I have not been back to since having children. And technically it’s not in Croatia but in Bosnia-Herzegovinia, about 2 ½ hours from Dubrovnik by car.  I had never heard of it or had any idea what it was about. My future husband really wanted to visit and I wanted to jump along for the ride. A quick synopsis on it:

Six young people claimed to have seen visions of the Blessed Virgin Mary. Beginning on June 24, 1981, the Blessed Mother appeared and later told the visionaries that God sent her to the world to help convert peoples hearts. Since then every year millions of pilgrims from over 120 countries journey to Medjugorje; over 40 million people have made this pilgrimage. 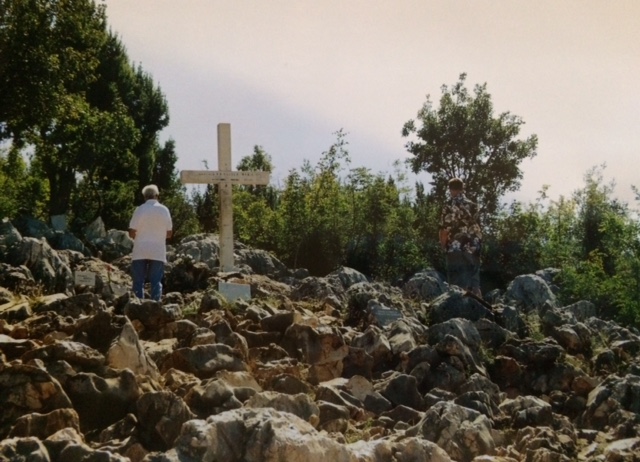 You walk up the hill and it’s hot, some of the rocks are razor sharp, (Some people actually walk it barefoot). As you make your way you’ll see the Stations of the Cross until you get to the top where the apparitions happened and the Virgin Mary’s statue stands.  It was not like visiting the blue waters of the Adriatic, but it was nice to have some downtime and reconnect with your spiritual side.

*Moving on to some of the more typical things to do in Dubrovnik; The Three Elafiti Islands Fish Picnic.  This was SUPER fun and worth a day trip going for first timers visiting DBK.  Basically you get to spend a day visiting/swimming/exploring/souvenier shopping on three islands.  The last island you stop at a local’s house for a wonderful meal of grilled fish and local wine.  Ok, I might have been really hungry but I have to say it was SO good. I just couldn’t stop
talk about the fish. And I still think about it to this day. 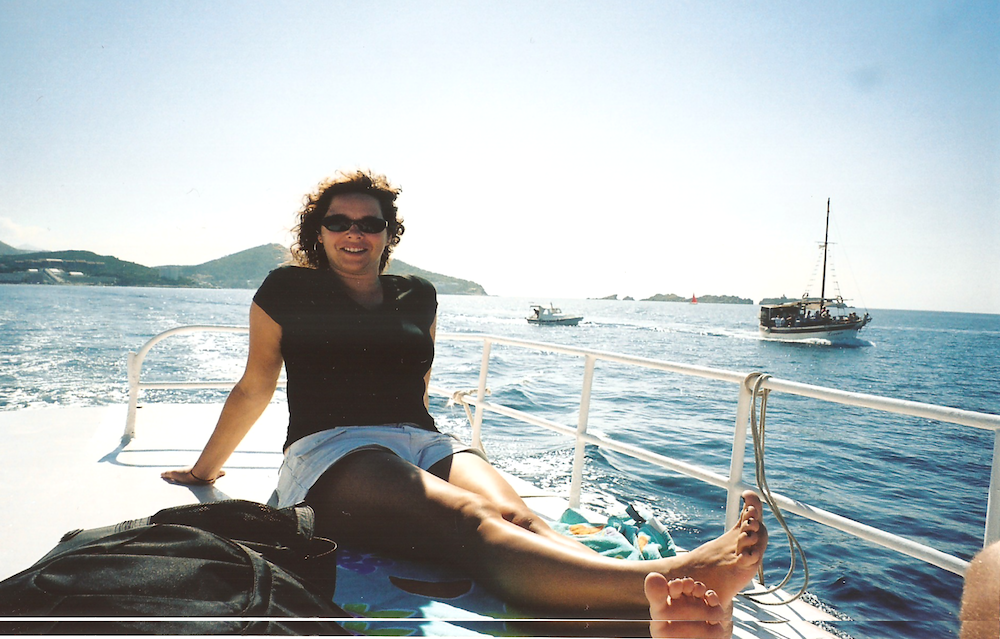 The next island, Lopud, known for its sandy beaches and it is the second largest island of all the Elaphiti.  It was nice to layout and sunbath uninterrupted.  I actually forgot how it feels LOL.
Throughout the island you can find the remains of many medieval churches along with a beautiful 15th century Franciscan monastery with its protective walls. 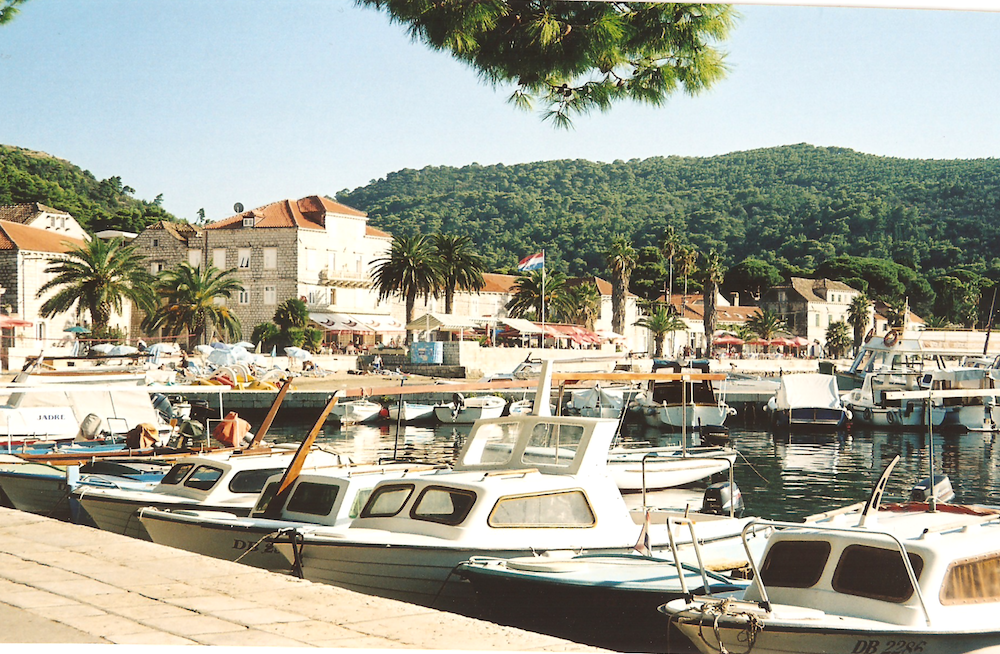 Last but not least is Sipan.  It is simply beautiful.  The island actually has two ports, Suđurađ an Giorgio) in the east, and Šipanska Luka (Porto Gippana) in the west.
You can find Roman ruins and churches dating back to the 11th century.  You feel like you’re in a history book.  All the Islands Lopud, Sipan and Kolocep are AMAZING for sure. But of the three I have to say I love the island of Sipan the most. It was so laid back and it didn’t hurt that my now husband has family on the island ☺.

* The island of Korčula is really one of my favorite places. It was like a mini Dubrovnik.  It was grand.  We drove from Dubrovnik to the port town Orebic and took the ferry to Korcula. This island has over 15,500 inhabitants making it the most populated Adriatic island after Krk.
It’s a little farther to go from DBK but totally worth it. The sights and the the slow pace are something to cherish.  In later visits (that I talk more about in future posts) I must say it was really worth staying a night or two because of the distance. 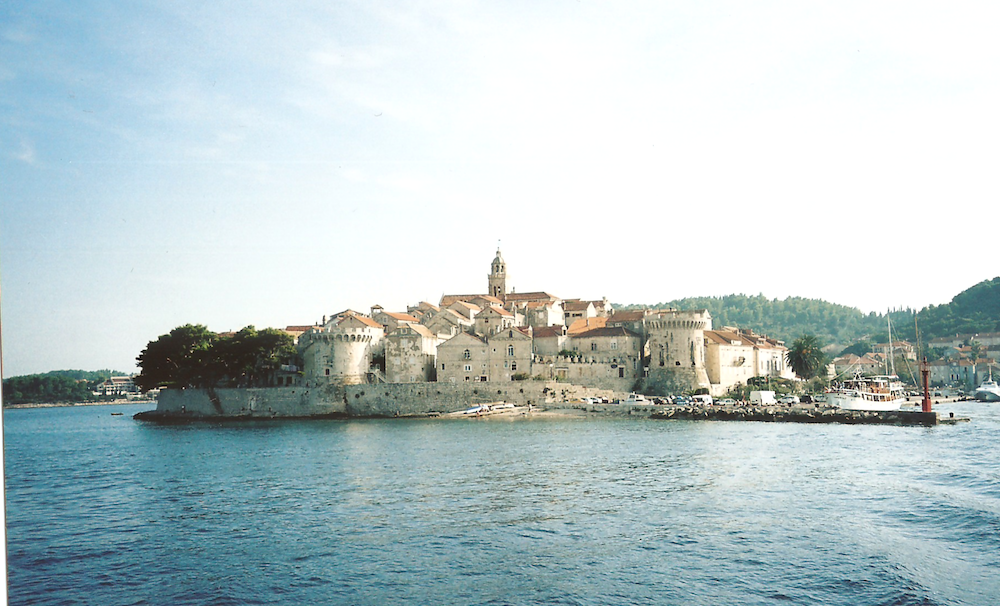 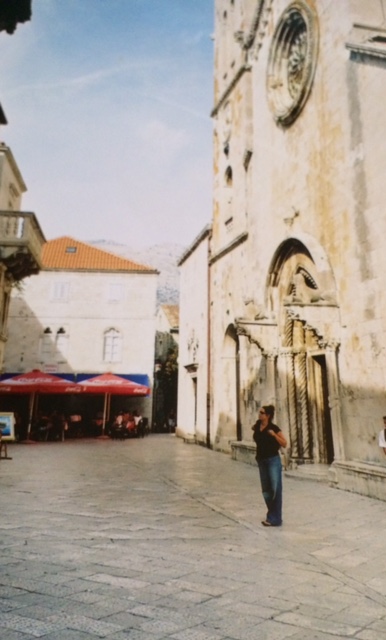 *A little side note is that we drove so we could stop at a couple of places along the way. One place was Ston. It was a major fort of the Ragusan Republic whose protective walls were regarded as a noteworthy accomplishment of medieval architecture. I couldn’t believe how amazing it was and how long it must have taken to build it. Our other stop was Trstenik.  There we wanted to stop to see the winery that Miljenko “Mike” Grgich of Grgich Hills winery in Napa, CA had built on the Peljesac peninsula, it overlooks the Adriatic Sea, north of Dubrovnik, in the Southern wine region of Croatia. (I’d definitely recommend this area if you enjoy wine.)

*Lokrum island is located just off the coast of Old Town, Dubrovnik.   It takes about 15 minutes to get there by taxi-boat which runs several times a day from the old city harbor. I remember getting off the boat and seeing a destroyed building that still showed a reminder of the war in the 90’s. And I can remember the sound of crickets singing it was just that peaceful.  Also, I never saw so many peacocks in my life roaming about.  This place is special.  After walking to the center of the island you come across Lokrum’s special attraction, a small lake called Mrtvo More (Dead Sea). It is a distinctive lake connected with the sea. Nearby there is a deserted Benedictine monastery, founded in 1023, and later abandoned in 1798. Also, Austrian Archduke Maximilian enjoyed a holiday home at one time on this island. And one of my most favorite stories about this place is about the legend of Richard the Lionheart.  As he was voyaging home back from the crusades he was shipwrecked on Lokrum in 1192.  Thanking God for his safety, he promised to build a church on the island.  But instead the people of Dubrovnik pleaded that he build it within the city walls – which he did.  (For you Game of Thrones fans, this is where some of  Kings Landing scenes are filmed). 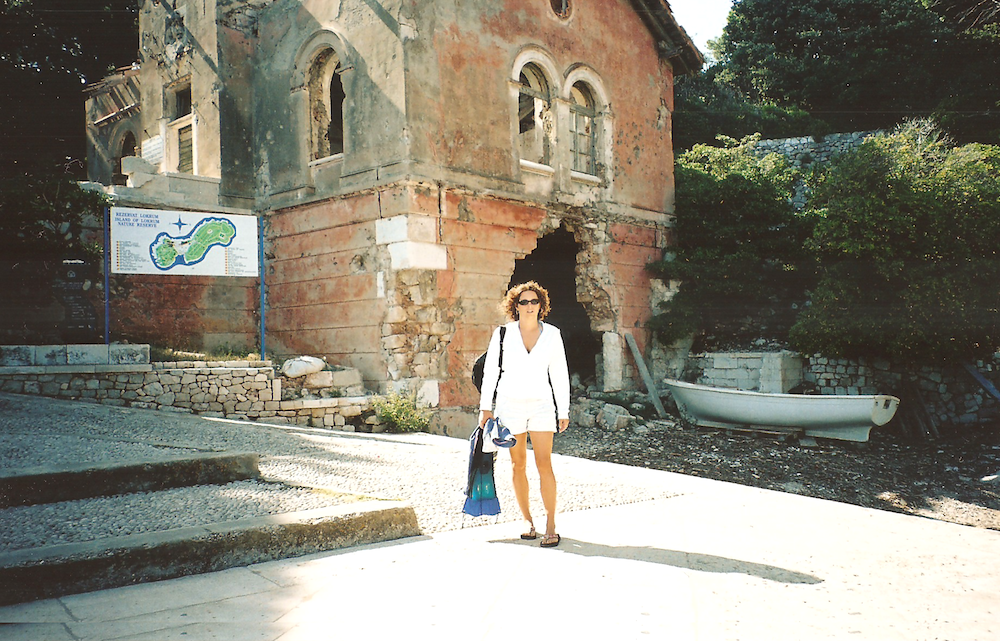 *So I think you can tell that I could go on and on about all of the beautiful things Croatia has to offer. But I will leave some room for my next Croatia post from another trip and year. You ask what’s my bottom line on this place? Well, this was Dubrovnik pre Game of Thrones era.  I must say a little bit of me misses that time before it all got so big. (OK – But I still love it with all the Game of Thrones stuff) DBK is hands down beauty upon measure. Each time I go I don’t want to leave. Basically, if I want to visit any another place in Europe then I better go before I get to Croatia otherwise I’m not leaving.

Dubrovnik in the Off Season- A Great Spot Anytime of the Year.